IF YOU BOOK IT, THEY WILL COME.

A LITTLE ABOUT US

Located in the Stockyards District of Kansas City, Missouri, Stockyards Brewing Co. is a craft brewery that doesn’t dwell on being a craft brewery. Why not? Because we opened Stockyards in 2016 for a simple purpose: to make good, unpretentious beer for hardworking people, reinvigorating a historic spot steeped in our city’s character. Pull up a barstool, and let us tell you a little more about our neighborhood.

WHERE WE CAME FROM

Then, in 1949 on the first floor of the Livestock Exchange building, the original Golden Ox restaurant was opened. Being the premier steakhouse in Kansas City, you could find everyone from ranching cowboys to U.S. presidential candidates dining there. But after several fires and floods, the Stockyards District fell into disrepair.

Not wanting the iconic Kansas City landmark to be lost for good, Stockyards Brewing Co. took over the space in the summer of 2015 in an effort to restore the rich history and nostalgia of the space. From the mahogany-paneled walls to the stained-glass drop ceiling over the bar, much of its original character and decor lives on in what is now our bar and taproom. 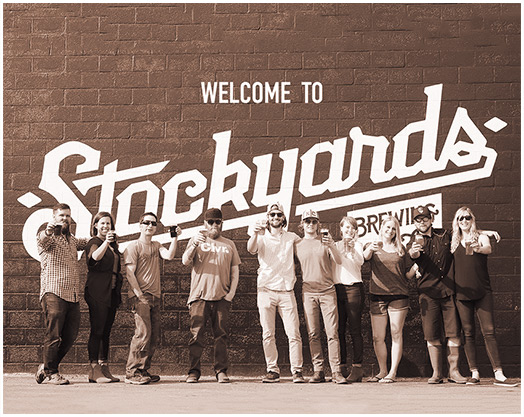 WHAT WE STAND FOR

Stockyards Brewing Co. strives to craft great tasting, locally made beers with modern, sustainable techniques, all the while honoring the industrious history of the West Bottoms.